Skip to content
Home » The contrasting personalities of BGM and FGM

The contrasting personalities of BGM and FGM 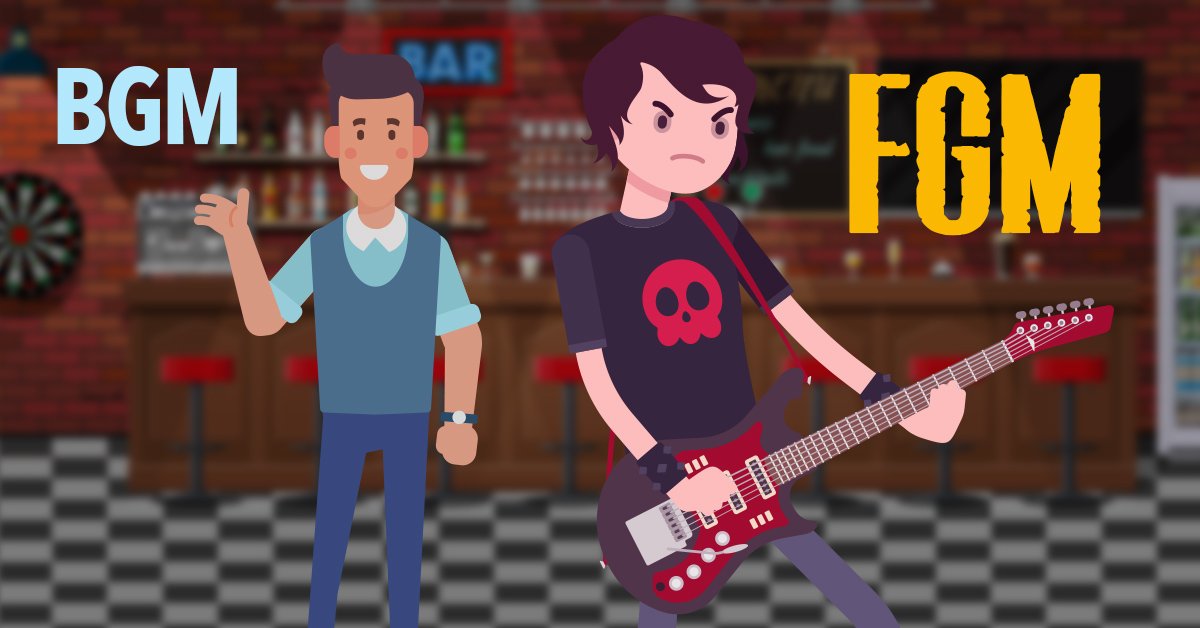 Do you ever feel confused about the difference between background music (BGM) and foreground music (FGM)? The best way to explain is to introduce our friends – the Geeyem brothers.

Brian Geeyem (B. Gee-yem) is the first-born. (Ok, if you haven’t realized by now, these are not real people. Just go with it!) He grew up in the 1900s and spent his early years providing soft music inside elevator cars to calm nervous passengers. There he earned the unflattering nickname – “Elevator Music” Brian (which still haunts him to this day).

Flynn Geeyem (F .Gee-yem) is Brian’s much younger, adopted brother. He was conceived 50 years later, after his musical parents read research about using atmospherics as a marketing tool. Flynn’s first job was with a new company called AEI Music Network (who later became DMX). They specialized in music programming aimed at the rising youth culture, which preferred something with a bit more energy and tempo.

The personalities of Brian and Flynn are very different. Brian is an introvert who was generally subdued , calm, and maybe even a little boring. He likes to hang out at museums, art galleries, coffee shops, fine dining restaurants, health spas, and shops for clothes at large department stores. Brian drives a small 4-cylinder hatchback, which he knows is not very powerful, but it gets the job done.

In contrast, Flynn is an extrovert who always likes to be the center of attention. He is a bit of a problem child and likes to push the limits, which often gets him in trouble. Flynn likes to hang out at sports bars, breweries, bowling alleys, fitness clubs, and shops for clothes at brand-name apparel stores. Flynn drives a turbo-charged convertible, because he likes the extra power and available “headroom” (This is getting punnier by the moment!).

Both Brian and Flynn enjoy hosting social events. Brian’s home has lots of small 4” ceiling loudspeakers distributed throughout each room. This is ideal for playing soft music evenly and at a volume level that allows guests to easily talk to each other. His playlists include classical and easy listening music.

Flynn on the other hand, is always the center of the social circle. He has the biggest and best home stereo that money can buy, including larger loudspeakers and subwoofers. For him, the higher music volume creates a cool vibe that keeps his guests coming back. Flynn’s playlist is always very current and filled with popular, high-energy music.

Keeping up with the times

While Brian is older, he does like to keep up with new technologies and recently upgraded his home sound system. After researching equal loudness, and learning the human ear becomes less sensitive to bass frequencies at lower listening volumes, he decided to replace his full-range 4” loudspeakers with a subwoofer+satellite (SUB+SAT) system in each room.

Brian discovered that modern SUB+SAT systems are designed with a deliberately boosted subwoofer. This helps to compensate for the bass sensitivity loss at his preferred listening volumes, with the added benefit of the satellite loudspeakers being smaller and less obtrusive.