Vancouver Post Alliance’s “Behind the Soundtrack” Event – A Great Success!

SFM was honoured to take part in “Behind the Soundtrack”, an unprecedented event supporting the postproduction industry in British Columbia. The event, organized by the Vancouver Post Alliance (VPA), was hosted by Hal Beckett, moderator and director of the VPA. The format was an all-day seminar at CBC Studio 1, a premier orchestral recording studio in Vancouver on April 30, 2016. The discussion panel included music supervisors, music editors, composers, sound editors and mixers and producers, allowing the audience to get an exclusive look into how a music soundtrack is planned, produced and scored for film and television projects.

As the audience was comprised of over 200 audio and music professionals, “Behind the Soundtrack” required an audio system with clear, high-quality sound powerful enough to fill the large, wide space of 2680 sq. ft. with 30′ ceilings. SFM’s Ramon Donati installed the 5.1 surround sound system using QSC loudspeakers for the playback of film soundtracks during the seminar. 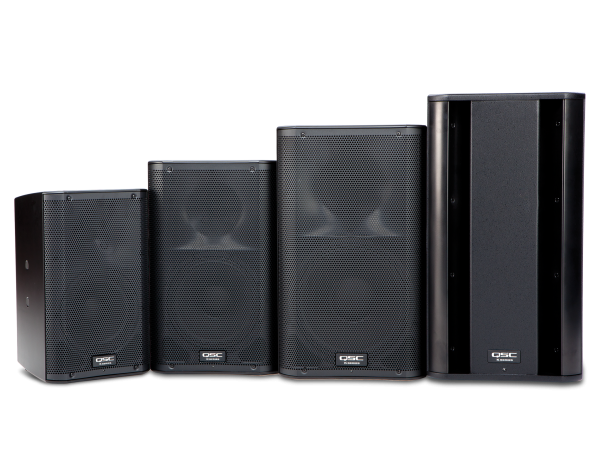 The set-up included three (3) QSC K10 active loudspeakers in the front of the studio, four (4) QSC K8 active loudspeakers surrounding the audience and one (1) QSC KSub active subwoofer. Donati opted to use eight (8) channels of the Shure ULX-D digital wireless system, facilitating the feedback of the panelists without any audio issues. Donati chose the QSC TouchMix-16 digital mixer for monitor control, which integrates simple mixing directly from the hardware. The wireless microphones were also mixed using one of the TouchMix’s input banks.

The renowned panelists discussed various topics relating to the production of film and television scores. Vince Renaud*, a freelance recording engineer with over 30 years of experience, was thrilled to contribute to the event. Following his involvement in the event setup, he noted that he was worried about providing a 5.1 surround sound system for such a large room but the QSC system exceeded expectations: “It was a pleasant surprise to hear the end result. The QSC system enabled us to set up a clear, balanced system in a short timeframe.”

The event concluded with the Vancouver Film Orchestra recording a live session of selected cues from CBC’s ‘Olympus’, ‘Arctic Air’, ‘The Romeo Section’ and ‘The Hollow’. The audience was raving about the sound of the system. States Hal Beckett: “Everybody was delighted with the quality and clarity of the QSC speaker system. The Shure microphone arrangement allowed every word to be heard by all, without feedback or other anomalies.”

Vancouver Post Alliance’s “Behind the Soundtrack” has proven to be a popular event for the industry, as people are still discussing the experience and were enthusiastic to go behind-the-scenes of their favorite films and television programs. This inaugural session of “Behind the Soundtrack” was an excellent opportunity to learn about the active postproduction industry in British Columbia and the Vancouver Post Alliance is sure to organize similar events in the future.

*Vince Renaud is a freelance recording engineer with over 30 years of experience in music recording and mixing, audio post production, equipment installation and maintenance, remote recordings, and sound reinforcement. Notable projects include Dialogue Supervisor/Re-Recording mixer for Neill Blomkamp’s 2015 feature film ‘Chappie’, and 2013 feature film ‘Elysium’, mixing the scores for Peter Jackson’s 2009 sci-fi blockbuster ‘District 9’, Gold Circle’s horror hit ‘The Haunting In Connecticut’, and also all 102 national anthems for the 2010 Winter Olympics, recorded with the Vancouver Symphony Orchestra, as well as audio editing, mixing and supervision on hundreds of hours of television.